Some of you are wondering why I have been so quiet and the answer is complicated. We have been quite ill and then we both have heavy workloads at the moment and so we took Easter to catch up on work and to catch the end of the bare root planting season. The decision to remove our old deciduous Escallonia hedge was one that took 3 years. I wasn’t willing to remove it until I knew what we were going to replace it with. I even tried to renovate the hedge but unfortunately, it had gone too long without proper care and we were mostly left with bare, dead branches for most of the year. Only two of the twelve shrubs that we had responded to the pruning and produced new shoots. 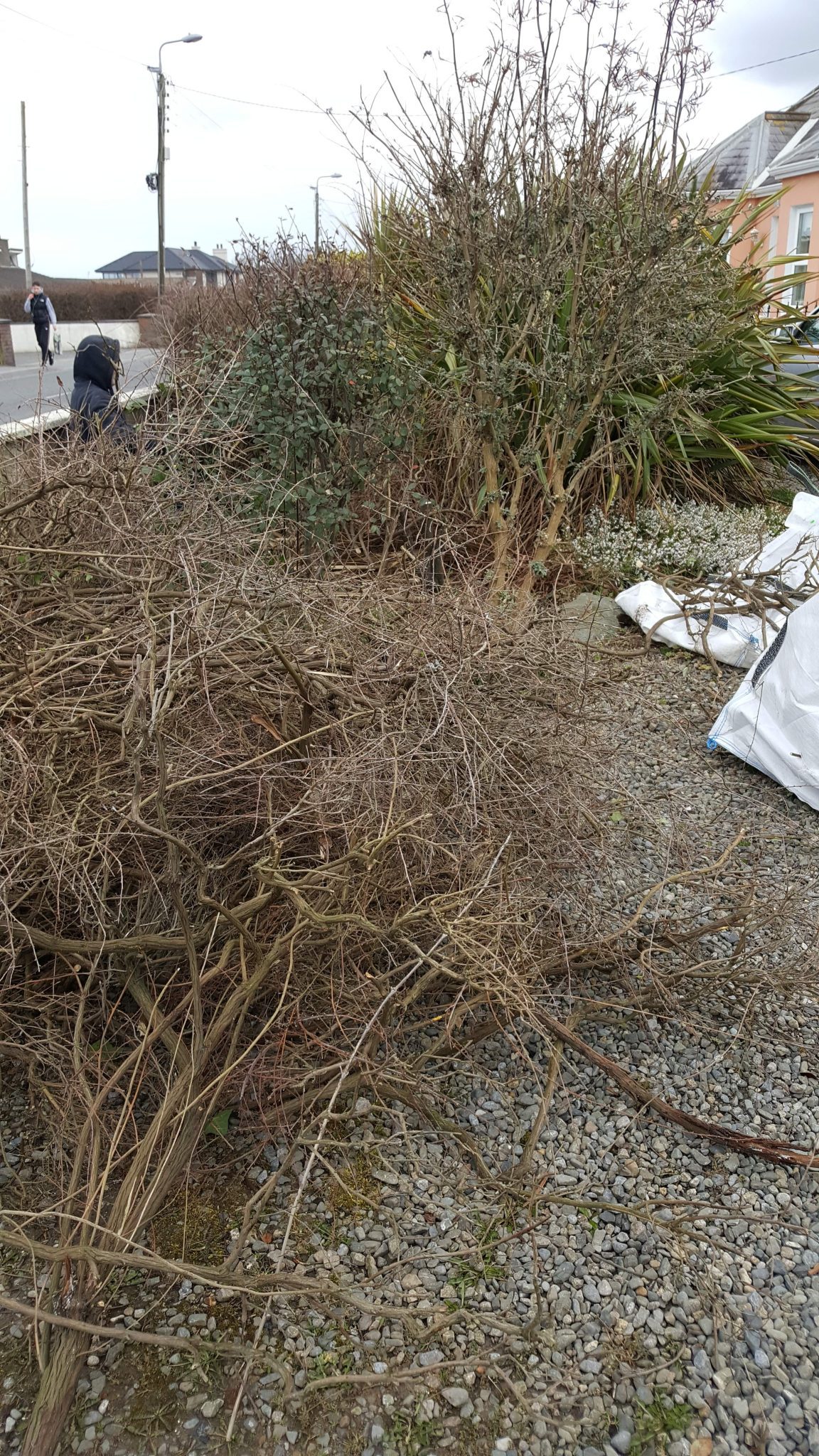 Living on the coast meant that any hedge that grows here has to deal with salt and harsh winds at times. The hebes that have been planted here and the one variegated Grisilinea show tremendous weather damage and this year, having delt with 3 storms and the Beast from the East, it was perfect timing to start over.

The original hedge is a type of Escallonia and it is old. The birds no longer nest in it and it was strangled by English ivy. Although this is a perfect hedge for coastal regions, while living with it we realised that for the front of our cottage we wanted an evergreen hedge which we could use as a backdrop for the rest of our planting. As you can imagine this left us with little to choose from.

Having a variegated Griselinia we did consider planting an entire hedge of it. We walked around the neighbourhood and had a look at what was growing and truth be told we saw very little. One of our neighbours had a Griselinia hedge but it died due to the severe night temperatures last winter and although Griselinia deals incredibly well with salt, it does not tolerate anything below -8C to -10C. Knowing that a few coastal dwellers had lost theirs and as much as I loved those broad leaves, I didn’t want to put in the effort of clearing a hedge, planting another and losing it to temperature drop in winter. If anything our storms are becoming more severe.

Enter the wonderful Karen Morrison and the Yew. I am very lucky to be part of a group of gardeners on Twitter who all help each other. Karen, who is based in Kerry but also along the coast, recommended a Yew hedge as she loved her own and found it tranquil. As soon as she said tranquil I was on board and I strted research Yew. 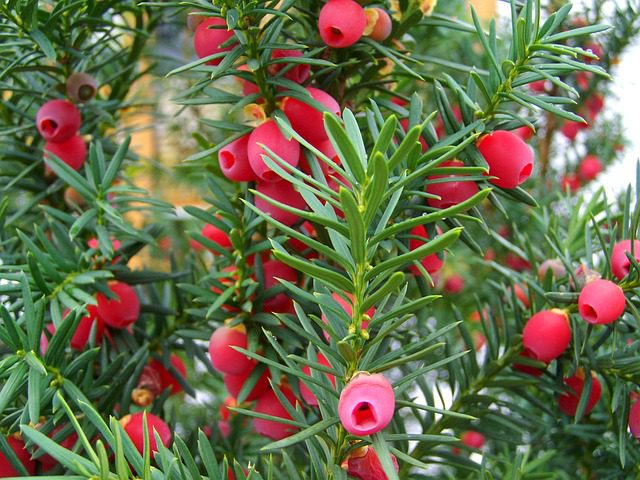 Yew by Tappancs via Pixaby

The King of Hedges

Yew (Taxus baccata) is a conifer that is native to western, central and southern Europe. The Irish Yew is female and bears fruit and due to its dense structure, it is perfect for wildlife to retreat into and also feed from in the darker months of the year. So here I was presented with a native evergreen option that supported our ideals.

There are only two real things to consider before planting a Yew Hedge and that is your soil must be free draining, Yew does not like wet feet. Yew has been deemed slow growing, reaching a 40 – 60cm growth in 1 season but like anything in a garden, patience is usually rewarded with magnificence. Feeding apparently is key to maintaining decent growth so watch this space. I should also probably mention that the Yew leaves and seeds are toxic to humans but then I grow Foxgloves too and we don’t intend to house any livestock that could be poisoned so I didn’t consider this as an issue.

Now, I can hear the more experienced gardener yelling at the screen right now. Yew would prefer a more sheltered site than harsh coastal winds. We thankfully are not exposed to the full onslaught of the east coast wind but there are a few times in the year that the wind can get severe. I also noted 3 other yew hedges in the area that are fairing better than Griselina and Eleagnus(Russian Olive). If you are wondering why I didn’t consider planting a Russian Olive hedge, we have 9 already on our property and that is too many for my liking. They are a wonderful shrub but the leaf drop is enormous and not something I want in the front of my cottage.

A Yew hedge is also perfect for topairy and only requires 1 annual cutting to keep it looking trim if you want a formal hedge but I like the slightly unkempt look. So, we ordered our Yew babies and I heeled them into a temporary site in March while we started the hedge removal. 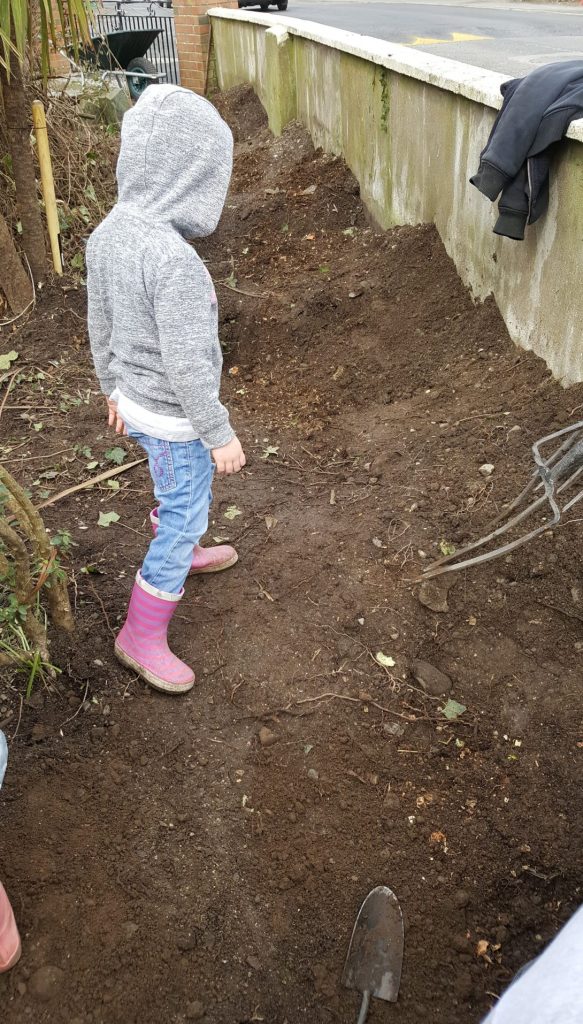 We dug out 12 mature Escallonia by hand and we removed all the English Ivy while painstaking lifting and protecting bluebells and other bulbs. On removing the old hedge we realised that four of the twelve shrubs had actually died and they lifted right out of the ground.  We learned a lot about our soil, mostly that it was free draining and was rich and alive. PHEW. But I also removed any diseased plants and excess soil around where they were in the front bed along with anything that was overcrowded. I have also developed a deep hatred of the native Irish fuschia but I’m saving that for a later post.

Next, we dug in some compost after we worked the soil before we drew a straight line and planted the Yew babies either side of it.

Our compost mainly is composed of rabbit poop. This is a wonderful thing in the garden and while I recommend it, please if you are going to have rabbits as pets, learn everything you can about them. A hutch is not enough, they need company and they are not good solitary animals. If you would like a rabbit as a pet please read the House Rabbit Society site before you decide. Rabbit poop is a gardeners dream, it is one of the only manures that can be used without rotting down and roses and courgettes love it. Also, our rabbit toilet bedding makes a wonderful compost activator so I could never be without our bunnies even if they throw tantrums and chew my peach tree. If you are a gardener but don’t have bunnies, befriend a bunny owner because they produce a lot of poop and I’m sure they would be more than happy to give it to you. 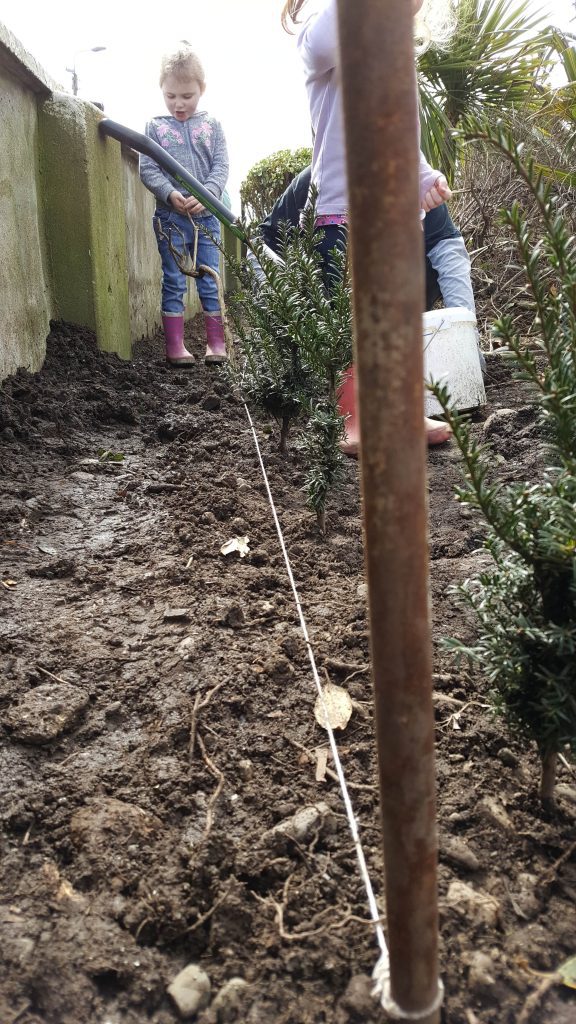 The toddlers helping to align the new hedge and yes, they each planted their own tree. 🙂

We also added some gravel as extra drainage for the Yew plants and planted them slightly raised so that water would run down either side. They are back about 2 feet from our garden wall to allow for growth a spreading and we planted them roughly 35 – 40 cm apart so that we would have a dense cover to provide privacy being on the main road and a school run. Our Yew are between 2ft and 3ft high which is perfect to train into what we want. Now, it is a waiting game were we protect, feed, water and monitor the new hedge. 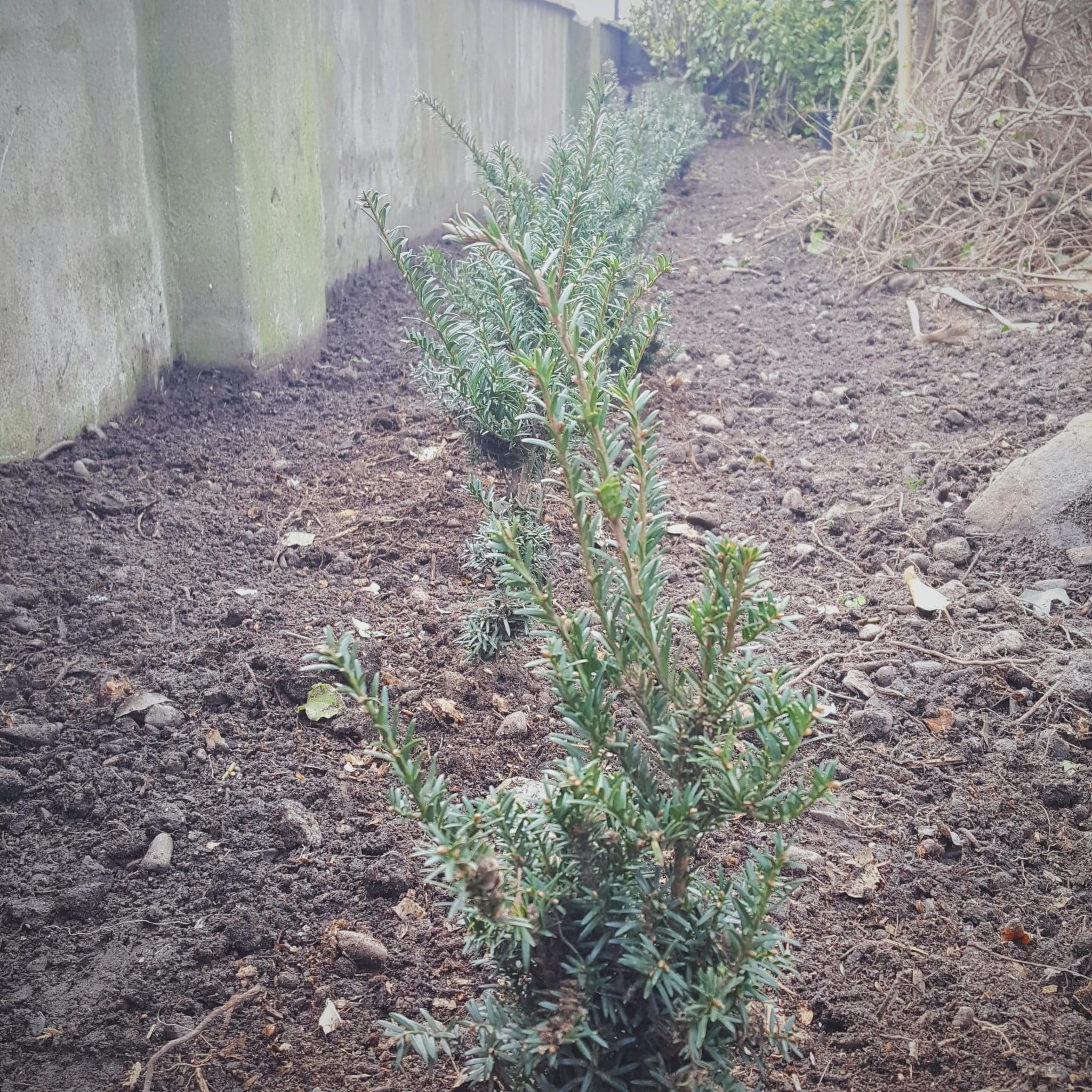 I promise to keep you updated but there is so much to do and progress is very slow.

Wishing you the best for all your garden/growing plans this season. don’t forget to tag with #growcraftlove so I can follow along too.

You can with a Ko-Fi!

Love | Overcoming the Overwhelm and Tackling Procrastination28th March 2017In “Creativity”

Hello there. Yes, you! Welcome to my creative online space.  I’m Nadia a freelance writer, podcaster and virtual assistant. On the blog, you will find stories on craft, lifestyle and creativity. I’m always fueled by coffee, so grab a cup and come join me.